I left university in 2009, shortly after the collapse, with a mediocre film degree and a zero-hour job as a cycle mechanic.

No, this is not one of those ‘poor-me,’ rags-to-riches yarns, and I shan’t pretend otherwise. I never came from rags, and I’m far from having riches, and no photo of me stood beside a rented Lamborghini is going to change that.

But I knew my life had to improve, and I knew how to write.

And I had an unusual hunch that writing was my ticket out. I was actually excited to collect my useless degree and dive into the real world. Ah, sweet ignorance.

After university, I applied to some two-dozen internships with every large advertising agency in London.

All of them rejected me. Didn’t even make the interview stage.

So, with nothing else to do, I took an unpaid position handling ‘press relations’ at a local theatre.

The job title was misleading.

I spent the entire summer scanning local newspapers for mentions. If I saw the theatre’s name, I’d take a pair of scissors and snip out the article, then paste it into a scrap book. Once the scrap book was full, it was filed in a fire-proof cabinet marked, ‘Press.’

I never saw anyone open that cabinet.

The work felt meaningless. Pointless. Occasionally I’d write to local reporters, but they never paid any attention. We used cookie-cutter press releases you see. Nothing ever worked, and I wasn’t allowed to make changes.

Unpaid, watching summer pass outside the office window, I had never felt so frustrated.

And it was a crappy time to be out of work.

Shops were boarded up. Telemarketers had the only jobs going. Twice I applied for a ‘marketing position,’ only to find it was a glorified Pyramid-scheme ran out the back of a grotty warehouse.

For a while I got pretty depressed. I even began drinking to cheer myself up.

Thank God for Stirling Moss. If he hadn’t arrived, who knows where I’d be? 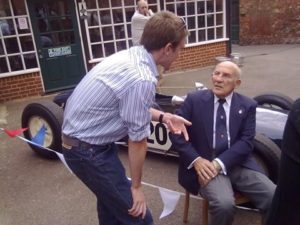 In case you don’t know, Stirling Moss is a British racing driver from the 1950s and ’60s. He was to bring some of his finest motor cars to our theatre’s grounds.

It would be the grandest event on the calendar…

…But only 35 people booked!

I saw an opportunity.

I decided to take it.

I’d have to break some rules, but what the hell. Things couldn’t get much worse, could they?

My newspaper-snipping duties were usually completed by 10am. This left me 7 hours to study copywriting books. At the time, I was reading How To Write Sales Letters That Sell by Drayton Bird.

I took notes. I followed his advice. I posted secret letters – both to the press and a handful of car clubs. It worked.

The event got double-page coverage in the local paper and pulled £11,000.

Then I wrote a letter to Drayton Bird.

I told him about the success and asked him for a job.

Not expecting a reply, I posted it before going on holiday. When I returned, my answering machine was rammed with messages.

“Alex, I got your letter. Will you call to let me know when you’re available?”

“Alex, I’m trying again to check you got my message.”

“Alex, I’ve sent an email. Following up with one more phone call. You’re a very difficult person to get hold of.”

Was that Drayton Bird?

It was Drayton Bird.

He told me he’d got drunk with Stirling Moss only a few months earlier.

We had lunch at some Italian place near the Thames. We drank. He told me a story about David Ogilvy ordering cornflakes at a 5-star restaurant.

We drank some more.

After dinner, we walked around for a bit. Drayton had a small office across the river in Southwark. I don’t think he went there more than twice in a single month.

“You might as well work from home, dear boy,” he said. “There’s no point you living in London.”

As it happened, this suited me fine.

For some time, I’d been involved with a Canadian girl. I was eager to keep hold of her. So I began an apprenticeship with Drayton and flew to Ottawa on a 6-month working holiday.

6 months became a year, became 2 years, and so on.

And I’m still at it.

On this blog, I discuss everything I’ve discovered about writing and the creative process:

But you’ll also find it useful if you hire creative talent.

After all, outsourcing creative work is tricky because its so subjective. I want to make it simple. You’re shown various ways to judge a piece of creative work. What’s more, I explain the process so it’s easier to manage your creative talent.

Whatever your reason for visiting, I suggest you start here.

Give me 3 minutes to show you around. I’ll point you to the stuff that’s most relevant to you, so you get maximum value from your visit in the quickest possible time. One more thing:

I’d be interested to know: What is your biggest writing/creative problem?

Will you send me an email to let me know? You can reach me at alex@alexbusson.com

I promise to respond, and your question helps make the blog better.