How the non-“woke” can develop a confident voice

If you’re not woke, then you’d better shut your mouth.

Otherwise, you’ll be tarred and feathered, and dragged before the jeering mob. Your life will be over. You will be fired. You will miss your mortgage payments. You will end up homeless. You will be fighting stray dogs for scraps of food on the street.

2 years ago, I promised to address this subject, but never got around to it.

Gillette had just released their super woke Superbowl ad. Men were shown as a bunch of burger-flipping, pig-headed sex pests: “Is this really the best a man can get?” went the slogan.

The ad was atrocious – not because it was woke, but because it insulted the potential customer. And yet I held off writing, because this subject has been debated to death.

“If I’m to address this matter of ‘wokeness,'” I thought, “then I’d better say something different.”

I don’t want to cover the same-old arguments, crying about how it’s “all gone too far.”

And I firmly believe there’s an opportunity here for growth.

I believe you can find a confident, authentic voice – even if you’re not woke. In fact, not being woke could help you develop a voice that’s unique. A voice that people want to follow.

As I see it, there are 3 pillars you must have in place:

Sad fact, most people who debate culture haven’t the faintest idea what they’re talking about.

Culture is a rich and deep tapestry that very few people ever understand. It means these arguments always become boring and repetitive.

In fact, I can only think of one man who properly understood western culture.

His name was Jacques Barzun. And if you’re weary of today’s Insta-Kardashian world, then you must read his book, From Dawn to Decadence. 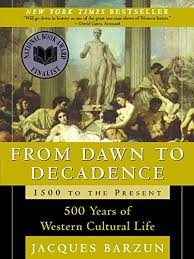 Fair warning: this is not a light easy read for the beach.

Hardly anyone else could have possibly written this book.

Barzun wrote From Dawn to Decadence in his nineties (he lived to 105). This book was only possible because the author had both a staggering intellect and a very long life.

And it’s a humbling experience, let me tell you.

I had to read with Buddhist monk concentration to absorb maybe 80% of what Barzun was saying. But the effort is worthwhile. It’ll drag you up to a far higher level than the next virtue-signal on Instagram.

“When people accept futility and the absurd as normal, the culture is decadent.” – Jacques Barzun

So that’s the first step.

Try to understand a bit about culture, and how it has evolved to this stage. And understand that you likely know almost nothing – while your adversaries probably know even less.

A principle is different from a belief in 2 key ways:

I don’t want to get self-indulgent, but I’ll share one of my key principles with you as an example.

It comes from individualism. Read it below, and see if you agree:

“Every individual should be free to live however they choose – so long as they’re not harming or imposing their will on others.”

This single principle has given me a catalogue of beliefs – hugely helpful today, when it’s not always easy to know what’s right.

On the one hand, you might look at my beliefs and call me a “left winger.”

I’m in favour of gay marriage and gay adoption. I’m pro-choice (within a reasonable time-frame). I despise “burka bans” and other rules telling people what they can and cannot wear.

Then again, you could look at my other beliefs and call me “hard right.”

I believe in abolishing the minimum wage and the income tax. I’m for ending central banks and dramatically shrinking the government.

But that’s enough about me.

What are your principles?

And how do those principles help you decide what’s right and wrong – and what you feel confident saying out loud?

Sticking to your principles isn’t always easy. It could cost you your reputation, your income, maybe even your life. Centuries ago, the “wrong” principles could have you burned at the stake, or hanged drawn and quartered.

Yet as you’re disembowelled, and your limbs are separated from your body, you could take comfort from knowing this fate was entirely outside of your control.

Because you don’t get to decide what you believe; your principles decide for you.

Still, it helps to have a high pain-threshold. Which brings me to the final step for anyone who’s not woke.

You must organise your affairs as best you can, so it’s easy to uphold your principles. You can’t live in fear of straying from the herd. You must do everything in your power to free yourself from the coercion of others.

Maybe it means selling your 5-bed house and moving into something more modest.

Maybe you don’t need the brand new car, the gizmos and all the monthly payments that go with them.

Maybe your income could be invested more aggressively, so you’re not as reliant on the steady paycheck. Or maybe you could use your savings to develop a skill that increases your personal freedom.

Personally, I live a humble life.

Apart from a few books, clothes and vital electronics, I have almost no physical possessions. When I need a phone, I use my wife’s. But I have something more valuable than all those attachments.

I have the freedom to tell anyone where to stick it.

Even if I never use it, this freedom is worth more to me than any car, house or holiday.

In these tricky-to-navigate times, it may even become crucially important.

As for the Gillette advert, well, it’s incredibly difficult to judge in any objective way.

For starters, it’s hard to know: “What exactly was the impact on sales?” General advertising doesn’t tell you like my kind of marketing would. Second, Gillette is part of a giant product conglomerate (Procter & Gamble). God knows how much impact it has on their monstrous revenues.

But maybe this is one of those moments when it doesn’t really matter.

All that matters is what you believe. What do you want to say?

Next post: What a filthy compost bin teaches about getting sales…

Previous post: How this invisible enemy destroys you from within…