Would you believe, this is NOT the Mona Lisa? 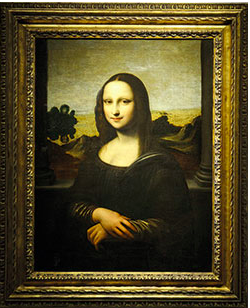 The famous lady’s twin has spent over 40 years locked in a Swiss bank vault.

I don’t know why, but I find this picture disturbing. It gives me the creeps.

I had the same problem when Cadbury ran an advert featuring a young Audrey Hepburn.

Maybe it’s just me, but I found it the strangest, most uncomfortable thing to watch.

It’s unnerving, seeing the dead brought back to life.

But I couldn’t stop watching.

Maybe that was the point?

Look at most advertising – especially the images – and they fail to hold attention. Stock images are the absolute worst.

Are you using stock images? Of ‘business people shaking hands’? ‘Young couples running and smiling’? Or, my most hated stock image, the ‘finger swiping a touch screen’? 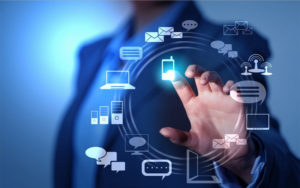 If you are, please stop.

These images don’t just fail to get attention. They actively repel audiences.

Because they scream ‘Corporate promotion.’ You’re better off getting rid of the picture and using the space for some hard-hitting copy.

Or you could do what David Ogilvy did.

Way back in the 1950s, Ogilvy took on Hathaway Shirts as a client.

When he showed up for the shoot, Ogilvy stopped the photographer. The picture was missing something. It needed some extra zing. But what?

Ogilvy dashed to a local drug store and bought an eye-patch for his model to wear.

‘The Man in the Hathaway Shirt’ became a powerful, recognisable brand. The eye-patch got attention, because it was different. It added story appeal in a way that boring, lame, run-of-the-mill model shots didn’t.

Having something unusual in your images makes you stand out from the crowd.