If you’re looking for a private jet, now could be a good time to buy.

Because you can now scoop up the Gulfstream G650 for a cool $40million. Considered the most luxurious private jet, the G650 has an 8000 mile range. At lower speeds, you can fly from London to Buenos Aires non-stop.

$40million may sound a lot. But it’s 20% less than WeWork paid for their disgraced former CEO Adam Neumann’s.

Now Neumann has been demoted, WeWork have put his jet back on the market amongst a glut of second-hand Gulfstreams.

Are the fake rich finally going back to flying coach?

I’ve been following WeWork’s story in disbelief and awe.

After these bubbles pop, it will surely go down as the poster-child of debt-fueled speculative mania.

The business model is just horrible. Get this:

WeWork apparently has $47billion of future rent payments due – with 15-year leases on some of the world’s most overpriced commercial property. They fill these shared-offices with ping pong tables and beer taps, then rent them out to tenants short-term.

The problem with WeWork is it doesn’t work.

It’s a disaster waiting to happen.

As revenues increase, their losses have moved in almost perfect lockstep: 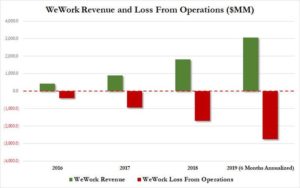 Now WeWork have shelved their dream of going public, they may be going broke – potentially just 6 months away from bankruptcy.

This Gulfstream Jet fiasco is another signal that the wheels are falling off.

I get no pleasure from watching the misfortunes of the fake bubble rich.

But fact is, my one-man self-employed copy business is more profitable than WeWork. And if you’re in business for yourself, I’ll bet it’s the same story for you.

It’s why diligent, responsible business-owners often get so much value from the marketing template – available here.

This helps you think about your business as a customer would. You step back and see which appeals and objections you need to speak to. Then…you take these insights into the market with your copy and campaigns.

It’s the opposite of what a money-losing IPO “Unicorn” would do.

Rather than get paid by the customer, their aim is to put on a big show. Sell the business on the stock exchange and make their money from foolhardy investors.

Those days are now ending, I predict.

Pretty soon, the only way to make money will be the old-fashioned way.

Previous post: How a Miniature Library can Skyrocket Your Skills