Why Trump Wins (Villainous Wisdom Inside)

Once a year or so, I peruse Ben Settle’s deadly ‘Success Villains’ books.

Settle explains that, in order to win money, love and respect, you have to behave like a villain. It’s incredibly fascinating, and I can’t recommend these books enough.

Nowadays, the need to become a villain is only getting more and more crucial. Especially if you’re trying to sell anything online. And it’s even more important in politics.

Which brings me to Trump.

I heard today that Trump is polling at his highest since his inauguration – and, according to Barrons, the markets may already be pricing in Trump 2020.

For the record, I’m no fan of Trump. He has blown up the size of government, ran bigger deficits than Obama (even during his supposedly stronger economy), and pressured the Fed to lower interest rates – which will surely blow yet more air into this stock market bubble.

But grievances aside, Trump is surely the most marketing-savvy President in U.S. history.

And he’s an amazing villain, make no mistake.

Ben Settle offers a number of ways to make yourself a villain. But the one I always remember is to be proactive, not reactive.

You see, if you’re stuck biting your nails, afraid of criticism or causing offense, then you’re being reactive. You’re letting others dictate your messaging and behaviour.

The proactive person, the villain, acts first – then watches as others react.

This is what Trump does.

“Our primary goal is to defeat Trump,” I heard one democrat nominee say on a late-night talk show recently.

What she doesn’t realise is that simply by saying this, she’s letting Trump dictate the game. She is literally playing into his hands. This is why, barring an economic collapse, I personally expect him to win again.

You can think about the times you’ve been reactive too, I’m sure.

(Certainly we’re all guilty of this.)

I recently did some work with a pet business who were absolutely petrified of animal rights activists. I couldn’t believe some of the tamest things they were afraid of saying in their marketing.

Why? Are animal rights activists your target market?

Can animal rights activists influence the people who are your target market?

Then what are you worried about?

If anything, you can use these people as an opportunity. Again, you just have to get thinking from a proactive position – not a reactive one. That’s what Tom Woods did.

I know that Tom Woods is another of Ben Settle’s fans.

A while back, he got trolled by some has-been rapper. But rather than shy away, apologise, or put out some loserish self-pitying tweet (reactive), he turned the twitter attack into a flash sale (proactive). Here’s the tweet: 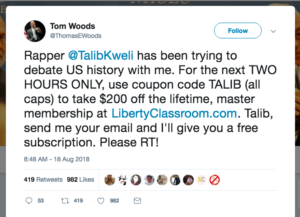 This, again, is villainy at its very best.

If you’re interested in becoming a villain, I suggest you check out both Settle’s books on Amazon.

No affiliate link. I’m too busy to set one up. And these books are dead cheap – my commissions would amount to a pittance. If you have a kindle, you can start following this villainous advice for a few dollars.

Next post: 4 Branding Insights From the Original Trailer Park Boy

Previous post: Farting Cows Give ‘Beyond Meat’ Lots of Sizzle