Is My Dog’s Insta-Success Proof of Boom or Bubble?

I don’t get any respect on social media, my dog gets more respect.

The best thing about being a dog is you never get trolled. Anyone who dares to troll you gets trolled by the animal activist trolls.

Jack came up from Kentucky, he was a stray.

Then, with his leg fixed, he managed to jump onto the table and eat a large bar of dark chocolate. The vet had to induce vomiting which cost $350.

But on Instagram Jack is finally paying his way. Within 2 days he got a message from a dog bowl company: ‘Jack, you are awesome. We want to send you one of our collapsable dog bowls for travelling. Will you post a picture with it?’

And a few more offers have come in since.

“How about that, Jack? You’re an influencer.”

Jack only had 100 followers by this point. But who cares about the numbers? He’s a canine Kardashian. He’s a star.

Here’s Jack pretending to be shot…

If you want Jack to promote your product, it pays to get on this gravy train early. Hop on before Jack is known everywhere and charging $100,000 a post.

Or is it all just a silly bubble?

This whole influencer thing looks to me like a bubble.

This economy has been climbing for 10 straight years. Before Jack’s success, I planned to call this post: ‘Enough already, just give me a big, fat recession!’

Recessions are nasty, but at least they clean the pond.

I’m frustrated trying to maneuver through the world when I have no confidence in anything that’s happening. 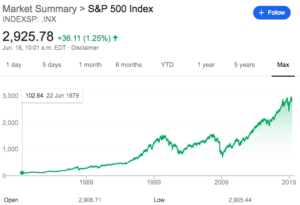 I heard one economist claim that almost all of that crazy growth from 2014 is due to share buybacks.

Money is still so cheap, companies are borrowing to buy their own shares – jacking up the price.

Can you imagine what’ll happen when this stops?

…These are the $1Billion+ companies floating on the stock market – even though many are losing hundreds of millions each quarter.

All of these recent “Hot IPOs” are money-losing companies:

These share sales are making billions for the owners. Yet there’s still nothing of value to buy.

…Has absolutely no intrinsic value whatsoever.

It’s not backed by anything. It will never function as a mainstream currency because it’s too volatile and the energy costs are too high.

Bitcoin only has value because people believe someone else will pay a higher price. But one day you run out of people who’ll pay the higher price and the price falls falls FALLS.

The U.S. Federal debt is now something like $22trillion.

I heard one talking-head say many Canadians will not survive even a small hike in interest rates. They really are maxed out that much.

But go back to when we had proper currencies backed by gold.

People didn’t know their ‘Credit Rating’; you lived within your means. If you couldn’t afford it, you saved for it. And if a business was making money, it was providing something worth paying for with savings.

We’ve got a trendy neighbourhood down the road from us – full of hip, retro stores. There’s a haberdashery.

I’m dead serious. You walk in, sit at the bar, and they charge you $5-10 for a bowl of cornflakes.

How long can this go on?

I want a recession because I want to live in the real world.

If you’re worried about a downturn, it’s worth checking out this page.

I give you the exact marketing template I have my clients fill out free. It can be an invaluable roadmap in any economy – boom, bust or bubble.

It’s good news, if you’re anything like me:  braced for a big bust.

Next post: Farting Cows Give ‘Beyond Meat’ Lots of Sizzle

Previous post: Why Most Dragons’ Den Pitches Get Burned