Wifey and I were browsing houses in Nova Scotia. A quirky Realtor popped up with this comic property description: 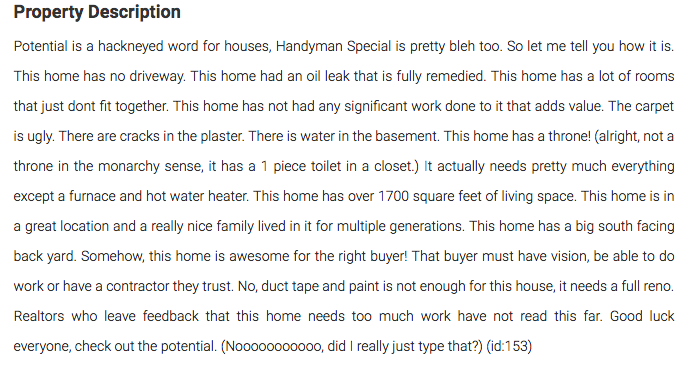 It seems odd, doesn’t it?

Who wants a house with ‘ugly carpets’, ‘cracks in the plaster,’ and ‘a lot of rooms that just don’t fit together’?

But you see, it’s actually one of the easiest ways to gain instant credibility with an ideal buyer.

“That buyer must have vision, be able to do work or have a contractor they trust. No, duct tape and paint is not enough for this house, it needs a full reno.”

By admitting to a weakness, you can sell without being ‘salesey.’ And you can actually make your offer more attractive to the right person. What could be more authentic than mentioning your product’s flaws?

What could be more endearing?

Getting rapid trust has never been so important

There was a time in direct-response marketing when a Doctor’s testimonial was the holy grail of proof. Top writers like Gary Halbert and Eugene Schwartz pulled millions of dollars writing promotions that were from a doctor’s point of view.

If a doctor endorsed your product, it was almost like you had nothing left to prove.

Now we’ve seen Dr. Oz under assault for making phoney claims. Celebrity anti-vaxers have been out on social media.

“We have measles coming back again,” my doctor told me last week while putting the needle in my arm. “Measles is back because people aren’t vaccinating their kids.”

She told me there have even been cases of polio, an illness which can paralyze.

“We tell them they need to vaccinate,” doctor said. “But they just think we’re part of the conspiracy.” 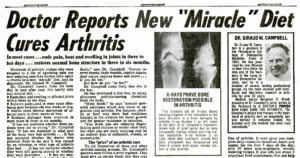 (A classic ad from Eugene Schwartz. Click here to see it in full. You still see ads like this in the Enquirer – but is it the same hard, unquestionable proof it once was?)

Trust has never been lower…

That’s why the ‘damaging admission’ is so effective.

Admitting to a small weakness is disarming for the other person. It sets them up to believe more of your wildly amazing strengths.

The key to making any effective ‘damaging admission’ is to:

a. Make sure you know who your ideal buyer is

b. Make sure it’s not a deal-breaker for that buyer, and…

c. Make sure it’s offset by an enormous benefit.

Personally, I’m hopeless at DIY. So I’m a poor candidate for that crappy house with a bunch of walls that need knocking down. But for someone who knows how to knock a wall down – without having the house come down with it – is in for a real bargain.

The weakness for most people can be spun into a massive benefit for that particular prospect.

What if the doctor did this too?

“Now, a vaccination does post a slight risk of making your child poorly. They might catch a cold. But there is no scientific evidence to say it will have serious effects. And if you don’t do this, the risk of them getting a debilitating – even life-threatening illness – is far higher.”

I’m not sure if everything in that sentence is true.

But if the doctor said something like that, I am certain they would have more success getting people to vaccinate their kids.

They’ve already admitted to a weakness. Why would they lie?

Don’t be afraid to do the same – so long as it’s not a deal breaker.

Try it. I can honestly think of no faster way to win trust.